In earlier grades, the idea has been introduced that different situations have different probabilities
of occurring and that for many situations there are a finite number of different possible outcomes.
In general, events from daily life can be classified as either:

• certain that they will happen; or

• certain that they will not happen; or

16.2.1 Sample Space of a Random Experiment

Using the terminology of set theory, the elements of S are then the outcomes of the random
experiment. For example, when tossing a coin the sample space S is made up of {heads,tails}. 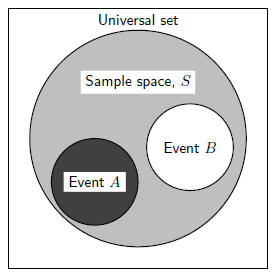 Venn diagrams can also be used to indicate the union and intersection between events in a
sample space (Figure 16.2).

3. Pieces of paper labelled with the numbers 1 to 12 are placed in a box and the
box is shaken. One piece of paper is taken out and then replaced.

The word probability relates to uncertain events or knowledge, being closely related in meaning
to likely, risky, hazardous, and doubtful. Chance, odds, and bet are other words expressing similar
ideas.

Probability is connected with uncertainty. In any statistical experiment, the outcomes that occur
may be known, but exactly which one might not be known. Mathematically, probability theory
formulates incomplete knowledge pertaining to the likelihood of an occurrence. For example, a
meteorologist might say there is a 60% chance that it will rain tomorrow. This means that in 6
of every 10 times when the world is in the current state, it will rain.

1. Equally likely outcomes are outcomes which have an equal chance of happening. For
example when a fair coin is tossed, each outcome in the sample space S = heads, tails is
equally likely to occur.

A red
B blue or white
C not green
D not green or red?

2. A card is selected randomly from a pack of 52. What is the probability that it
is:

A the 2 of hearts
B a red card
C a picture card
D an ace
E a number less than 4?

3. Even numbers from 2 -100 are written on cards. What is the probability of
selecting a multiple of 5, if a card is drawn at random?

There are two approaches to determining the probability associated with any particular event of
a random experiment:

1. determining the total number of possible outcomes and calculating the probability of each
outcome using the definition of probability

Perform an experiment to show that as the number of trials increases, the relative frequency
approaches the probability of a coin toss. Perform 10, 20, 50, 100, 200 trials of tossing a coin.

The following results apply to probabilities, for the sample space S and two events A and B,
within S.

1. Rory is target shooting. His probability of hitting the target is 0.7. He fires five shots.
What is the probability that:

A all four pass?
B all four fail?
C at least one passes?

5. With a single pick from a pack of 52 cards what is the probability that the card will be an
ace or a black card?

2. A student passing or failing an exam

This means that if we examine the elements of the sets that make up A and B there will be
no elements in common. Therefore, A ∩ B =

1. A box contains coloured blocks. The number of each colour is given in the following table.

A block is selected randomly. What is the probability that the block will be:

B purple or white

2. A small private school has a class with children of various ages. The table gies the number
of pupils of each age in the class.

If a pupil is selceted at random what is the probability that the pupil will be:

F either 3 or female?

3. Fiona has 85 labeled discs, which are numbered from 1 to 85. If a disc is selected at
random what is the probability that the disc number:

B can be multiplied by 3

C can be multiplied by 6

E is not a multiple of 5

where A’ refers to ‘not A’ In other words, the probability of ‘not A’ is equal to one minus the
probability of

Most probabilities that occur in practice are numbers between 0 and 1, indicating
the event’s position on the continuum between impossibility and certainty. The closer
an event’s probability is to 1, the more likely it is to occur.

For example, if two mutually exclusive events are assumed equally probable, such
as a flipped or spun coin landing heads-up or tails-up, we can express the probability
of each event as ”1 in 2”, or, equivalently, ”50%” or ”1/2”.

Probabilities are equivalently expressed as odds, which is the ratio of the proba-
bility of one event to the probability of all other events. The odds of heads-up, for
the tossed/spun coin, are (1/2)/(1 - 1/2), which is equal to 1/1. This is expressed
as ”1 to 1 odds” and often written ”1:1”.

1. A group of 45 children were asked if they eat Frosties and/or Strawberry Pops. 31 eat
both and 6 eat only Frosties. What is the probability that a child chosen at random will
eat only Strawberry Pops?

2. In a group of 42 pupils, all but 3 had a packet of chips or a Fanta or both. If 23 had
a packet of chips and 7 of these also had a Fanta, what is the probability that one pupil
chosen at random has:

A Both chips and Fanta
B has only Fanta?

3. Use a Venn diagram to work out the following probabilities from a die being rolled:

4. A packet has yellow and pink sweets. The probability of taking out a pink sweet is 7/12.

A What is the probability of taking out a yellow sweet
B If 44 if the sweets are yellow, how many sweets are pink?

5. In a car park with 300 cars, there are 190 Opals. What is the probability that the first car
to leave the car park is:

A an Opal
B not an Opal

6. Tamara has 18 loose socks in a drawer. Eight of these are orange and two are pink.
Calculate the probability that the first sock taken out at random is:

7. A plate contains 9 shortbread cookies, 4 ginger biscuits, 11 chocolate chip cookies and 18
Jambos. If a biscuit is selected at random, what is the probability that:

A it is either a ginger biscuit of a Jambo?
B it is NOT a shortbread cookie.

8. 280 tickets were sold at a raffle. Ingrid bought 15 tickets. What is the probability that
Ingrid:

A Wins the prize
B Does not win the prize?

A How many children were in the school
B What is the probility that a child chosen at random has:
i. Brown eyes
ii. Red hair
C A child with brown eyes is chosen randomly. What is the probability that this child
will have red hair

A If I choose a sweet at random what is the probability that it will be:
i. purple or blue
ii. Black
iii. purple
B If there are 70 sweets in the jar how many purple ones are there?
C 1/4 if the purple sweets in b) have streaks on them and rest do not. How many
purple sweets have streaks?

11. For each of the following, draw a Venn diagram to represent the situation and find an
example to illustrate the situation.

13. All the clubs are taken out of a pack of cards. The remaining cards are then shuffled and
one card chosen. After being chosen, the card is replaced before the next card is chosen.

14. Thuli has a bag containing five orange, three purple and seven pink blocks. The bag
is shaken and a block is withdrawn. The colour of the block is noted and the block is
replaced.