Abstract—Interconnect resistance and inductance shield part of
the load capacitance, resulting in a faster voltage transition at the
output of the driver. Ignoring this shielding effect may induce significant
error when estimating short-circuit power. In order to capture
this shielding effect, an effective capacitance of a distributed

load is presented for accurately estimating the short-circuit
power. The proposed method has been verified with Cadence
Spectre simulations. The average error of the short-circuit power
obtained with the effective capacitance is less than 7% for the example
circuits as compared with an

model. This effective
capacitance can be used in look-up tables or in empirical -factor
expressions to estimate short-circuit power.

SINCE power has become an important design criterion in
integrated circuits, accurate and efficient power estimation
is required in the circuit design process. As compared with dynamic
power which is well characterized, short-circuit power
is more difficult to model due to the complicated transient behavior
of the short-circuit current [1].

The short-circuit power dissipation in a gate is primarily
determined by three factors: input signal transition time, load
capacitance, and size of the transistors in the gate. In [2],
Veendrick developed a closed-form expression for short-circuit
power dissipation in an unloaded CMOS inverter. More
accurate device models have recently been adopted to analyze
short-circuit power [3], [4]. It is shown in [4] that short-circuit
power can be as high as 20% of the total active power in high
speed, low voltage circuits. As interconnect coupling becomes
more significant in advanced technologies, the impact of
crosstalk noise on the short-circuit power is analyzed in [5] by
introducing an effective input slew. In these analyses, a lumped
capacitor is assumed as the load. With CMOS technology
scaling, the interconnect resistance can be comparable to the
gate resistance and should be included in the load model. In
[6], a π shaped

model is adopted as the load. An effective
capacitance of the

structure for short-circuit power
estimation is described in [7] and [8] to maintain compatibility
with popular look-up table or -factor based power models.
With increasing on-chip frequencies and longer interconnects,
the interconnect inductance can also no longer be ignored.
As described in [9], the interconnect inductance also exhibits
a shielding effect on the load capacitance, increasing the
short-circuit power dissipated by the driver.

In [10], an effective capacitance of an

load is developed
to accurately estimate short-circuit power. This effective capacitance
model is extended in this paper. The importance of the
inductive shielding effect is identified and the model is further
verified for gates with unaligned multiple inputs. The rest of this
paper is organized as follows. In Section II, a distributed

network is reduced into a π model. From this π model, the effective
capacitance is determined. In Section III, the proposed
effective capacitance model is verified by Cadence Spectre simulations
for gates with single and multiple inputs. Finally, some
conclusions are offered in Section IV.

Model order reduction techniques are commonly used to analyze
the timing and power of interconnects to improve simulation
efficiency. In Section II-A, a π model is generated from
a distributed

tree through a typical model order reduction
method—moment matching. In Section II-B, this π model
is further reduced into an effective capacitance by matching the
average charging/discharging current.

A. π Model Representation of

network is reduced to an

of the admittance
at the driving point. Similarly, an

network can be reduced
to an

model by matching the first four moments,
as shown in Fig. 1. This reduction, however, can be unrealizable
(the value of the circuit element is not positive real). In order to
obtain a realizable

is introduced
in [12], which is the third order admittance moment without considering
the inductance. By matching

denote the near end and far end capacitance,
respectively.

The input admittance of a distributed

interconnect with
a load admittance

are the total resistance, capacitance, and inductance of the interconnect,
respectively. By expanding

into a Taylor series
of s around zero, the moments at the input of the

interconnect
can be obtained as 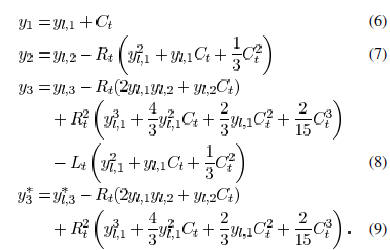 The input admittance moments of a distributed

tree can
be determined by recursively applying (6)–(9). From these moments
and (1)–(4), the corresponding π structure can be obtained.

B. Effective Capacitance for Short-Circuit Power

Although a π model is highly accurate, four coefficients are
required in this model, making it incompatible with k-factor
expressions or look-up table based power models. An effective
capacitance greatly simplifies the model with little penalty in
accuracy, as shown in Fig. 1.

interconnects has
been developed for estimating delay and short-circuit power in
[7], [14]. The interconnect inductance however also exhibits a
shielding effect [9]. This inductive shielding effect is illustrated
with an example, as shown in Fig. 2. In Fig. 2, a distributed

tree is driven by a

CMOS inverter. Since the shielding
effect of the interconnect is only significant in interconnect loads
with a high impedance which are generally driven by large gates,
a large inverter is considered with transistor sizes,

The impedance parameters of the interconnect
are

CMOS technology. The wire width
is

and wire thickness is

The load capacitance is

. The short-circuit current in the inverter is illustrated
in Fig. 3 for different values of interconnect inductance.
When the interconnect inductance becomes larger, a greater far
end capacitance is shielded. Less effective capacitance is therefore
seen at the inverter output, permitting the output voltage to
change faster at the beginning of the signal transition, thereby
producing a larger short-circuit current. The currents are measured
at the source of the pMOS transistor with a rising edge
input as shown in Fig. 4. The discontinuity of the waveform
is due to the discontinuity of the transistor capacitance model
used in the simulation. Strictly speaking, the currents shown in
Fig. 3 include two non-short-circuit current components. The
first component is the current flowing through the capacitance

, as shown in Fig. 4. This component can be determined as

and is independent of the load. The second
component is the current

flowing from the output to

due
to the overshoot at the output at the beginning of the signal transition.

for a rising edge, the current drawn from the
gate by an

Applying an inverse Laplace transformation to (10), the current
in the time domain is

The current drawn from the gate by an effective capacitance is

Equating the average of

during a period from 0 to
an evaluation time

, can be obtained as

is a function of 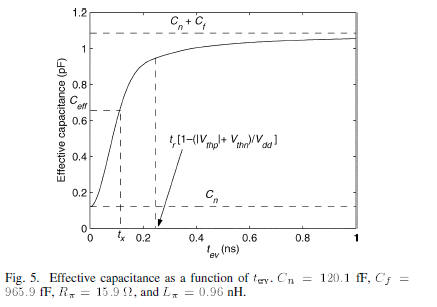 is the time when the driver output achieves 50% of

, which
is the objective and is not known a priori. Several iterations are
therefore required to determine

is in the range from 0 to

corresponds to
the time when the input reaches

for a rising edge

for a falling edge). As shown in Fig. 5, for the time period

, the effective capacitance is overestimated and the
short-circuit current is underestimated. For the period

, the effective capacitance
is underestimated and the short-circuit current is overestimated.
By properly adjusting

, the estimation error of the short-circuit
current in different time regions can be canceled. By comparing
Spectre simulations, a fitting parameter is adopted to determine

The short-circuit current waveforms in an inverter with different
load models are compared in Fig. 6. For this inverter,

. As shown in Fig. 6, the π
model can accurately characterize a tree structure. The waveform
obtained with a π model is indistinguishable from the
waveform with the original

is small. Note that
unlike

for estimating the delay [14],

for short-circuit
power estimation is independent of the transistor size. 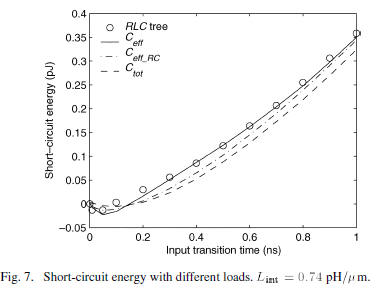 A. Gate With Single Input

tree. For example, the error for

ns is
28.1%. More accurate estimations can be obtained with

(only considering the resistive shielding effect) and

. The inductive
shielding effect can be evaluated by the ratio of

. In Fig. 8, this ratio is plotted with different input
transition times and wire inductances for the example circuit
shown in Fig. 2. As shown in Fig. 8,

decreases with increasing
interconnect inductance. The ratio of

approaches zero, the driver
only sees the near-end capacitance, both

is sufficiently large, the driver has sufficient time to charge
and discharge the far end capacitance, both

, and the ratio also approaches one.

Since the dynamic power is usually determined as

(where α is the switching factor), the reduction
in dynamic power 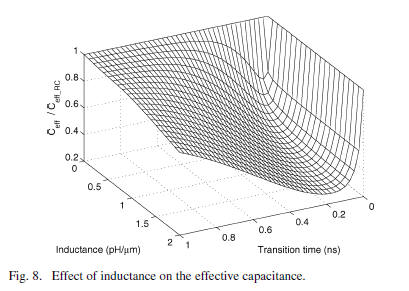 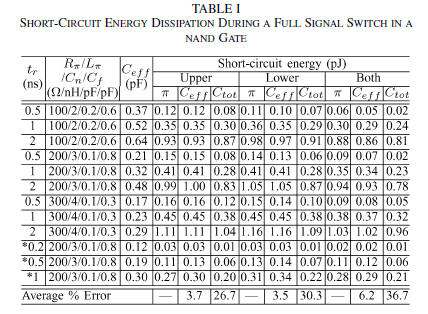 cannot be characterized by

,
the error of the power estimation is greater for fast inputs. With
very slow inputs, although the output voltage waveform deviates
from a quadratic behavior, the proposed method remains
accurate as shown in Fig. 7. In these cases, the shielding effects
are small, and the effective capacitance approaches

B. Gate With Multiple Inputs

The effective capacitance concept can also be applied to other
logic gates with multiple inputs, such as NAND and NOR gates.
The short-circuit energy consumed by a two input NAND gate
during a full signal transition is listed in Table I for different
input transition times and interconnect loads. The two inputs
of the NAND gate are denoted as the upper input and the lower
input according to the relative position of the input terminal.
Three switching patterns are considered: only the upper input is
switched (the lower input is tied to

), only the lower input is
switched, and both of the two inputs are connected and simultaneously
switched. The size of the transistors in the NAND gate
is

The rows starting with an

are obtained with a 45-nm [15] CMOS NAND gate, and the
transistor sizes are

. As listed
in Table I, the effective capacitance can accurately capture the 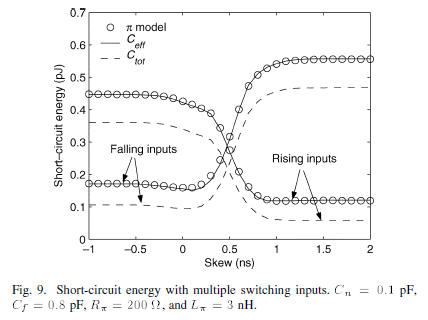 shielding effect of the resistance and inductance in determining
the short-circuit power. The average error of the short-circuit
power is less than 7% as compared with the π model. The average
error with the total capacitance, however, is more than
26% for these examples. Note that for a 45-nm CMOS technology,
a new fitting parameter can be determined to further improve
the accuracy of the model.

For multiple switching inputs with offsets in delay (non-simultaneous
input signals), an equivalent input signal has been
developed in [16] for estimating the short-circuit power. From
this equivalent input signal, an effective capacitance can be obtained
from (16) and (18). The short-circuit energy dissipated
in a NAND gate is shown in Fig. 9 for different skew between
the two inputs. The transition time of the upper input and lower
input is 1 and 2 ns, respectively. The skew is determined as

are the starting time of
the transition at the upper input and lower input, respectively.
From Fig. 9, it can be seen that the effective capacitance model
is also valid for multiple switching inputs with delay offsets.
Look-up tables or -factor expressions are commonly used
to model short-circuit power as a function of

. The
total transient power in a CMOS gate driving an interconnect
network, therefore, can be represented as

includes the total interconnect capacitance and the
parasitic capacitance of the transistors. If glitches occur at the
output, both dynamic power and short-circuit power depend
upon the transient voltage waveform at the output. Expression
(19) is no longer valid in this case and a more complicated analysis
is required.

is less than 7% as compared
with an

model. This effective capacitance can be
used in look-up tables or in empirical -factor expressions to estimate
short-circuit power as well as in analytic models to simplify
the interconnect analysis process.