2. The union of two closed sets is closed. If p is a limit point of one of the two sets, it is still a limit point of
their union (every neighborhood of p will contain points other than p from the one set and thus from the union).
Therefore the union will always be perfect.

by the way we defined A and B.

A and B are disjoint.

The limit points of A are (

). A contains no limit points of B and vice
versa.

A and B are separated.

6. A point is a limit point of a set if we can construct a sequence of points in the set not equal to the limit point that
converge to it.

For any point p in the Cantor set, and for each approximation Cn, p is contained in a closed interval, whose
endpoints are in the Cantor set. At least one of these points xn differs from p.

The sequence (xn) is in the Cantor set, differs from p, and converges to p since |xn − p| is at most the width of
the closed interval, which goes to 0.

. The sequence (1/n) has no subsequence
converging to a limit in X, since the sequence converges to 0. Therefore X is not compact.

8. Let Cn be the nth approximation to the Cantor set, with C0 = [0, 1].
There is at least one Cn that contains both x and y, namely C0.
Since 3−n -> 0, for large n, 3−n < y − x, and the width of the closed intervals in Cn is less than the distance
between x and y, forcing them to be in different intervals.
At some point, in going from one approximation to the next x and y go from being in the same interval to being
in different intervals.

At some point, in going from one approximation to the next x and y go from being in the same interval to being
in different intervals.

9. We will use the Alternating Series Test. The series is alternating; we need to show that the magnitudes of the
terms are decreasing and that their limit is 0.
The magnitude of the nth term is 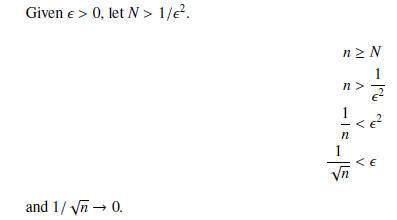 Also note that since

the terms of this series are positive and bounded above by 1/(n^2).
Since

converges, so does this series by the Comparison Test.